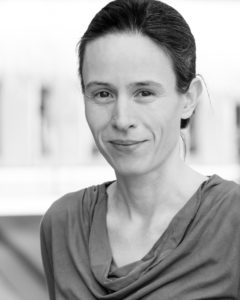 [/column]
[column lg=”9″ md=”9″ sm=”12″ xs=”12″ ]Attention and vision are interlinked systems. It is of no surprise then, that Dr. Laura Busse’s early career focused on attention. During her master’s at the University of Tübingen, she studied object-based multisensory attention under the supervision of Dr. Marty Woldorff. She then came to Göttingen to pursue a PhD studying the influences of attention on single unit responses in the middle temporal (MT) area of the brain. Making the jump to vision, Dr. Busse then studied the visual processing in the cat V1 and visual behaviour in mice under Dr. Matteo Carandini in the Institute of Ophthalmology, UCL and the Smith-Kettlewell Eye Research Institute. Her work and contributions have been recognized by the German Academy of Sciences Leopoldina Fellowship.

Now, Dr. Busse is a professor of Systemic Neuroscience at the Ludwig Maximilian University of Munich. Her lab works with awake behaving mice to investigate the thalamic and cortical circuits underlying visual information processing. Their methods include behavioural training, eye tracking, extracellular silicon probe recordings, and optogenetics. They collaborate with computational neuroscientists whenever possible. The findings of their work will be elaborated during her talk, for which Dr. Laura Busse has kindly provided a synopsis:

“Feed-forward sensory processing is a fundamental model of how the brain mediates visual perception. Using a largely feed-forward architecture, artificial neural networks can now carry out robust and dynamic operations as to rival human perception. So why then, in the brain is feedback such a prominent and ubiquitous motif? As a model for feedback effects on sensory processing, the cortico-thalamic (CT) circuit has, for over half a century, sparked much interest. Despite these efforts, however, how CT feedback influences the representation of visual information remains poorly understood. Here, we revisited the fundamental question of cortical feedback’s role in thalamic visual processing. We performed a series of experiments using optogenetic tools for circuit manipulations in awake mice. We found that CT feedback during spontaneous activity enhanced firing rates and reduced bursting, and, during processing of natural movie clips, reduced sparseness of dLGN responses. Hence, CT feedback seems crucial for promoting tonic firing mode in dLGN, potentially allowing a more linear transmission of incoming visual information. Furthermore, our results indicate that CT feedback shapes spatial processing. Measuring tuning for stimulus size, we found that dLGN RFs in conditions with intact CT feedback were smaller and showed stronger surround suppression. Finally, we demonstrate that these effects on spatial integration might, at least partially, be mediated by neurons in the visual part of TRN, via which CT feedback can exert suppressive effects.
Together, our findings suggest that a function of CT feedback is to enhance responses to local visual signals and shape contextual modulations.”