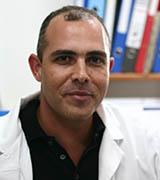 Title of the talk:
Bridging the genotype-phenotype gap: Genetic and optogenetic dissection of the central stress response

Born in Israel in 1970, Prof. Alon Chen received a BSc in biological studies from Ben-Gurion University of the Negev in 1995, and a PhD from the Weizmann Institute of Science in the Department of Neurobiology, in 2001. Between 2001 and 2005, he served as a Research Associate in the Laboratories for Peptide Biology, at the Salk Institute for Biological Studies, La Jolla, California. In 2005, he joined the Weizmann Institute in the Department of Neurobiology. At 2013 he was nominated as Director and Scientific Member at the Max Planck Institute of Psychiatry and as the Head of the Max Planck Society – Weizmann Institute of Science Laboratory for Experimental Neuropsychiatry and Behavioral Neurogenetics.

Prof. Chen’s research focuses on the Neurobiology of Stress, particularly the mechanisms by which the brain is regulating the response to stressful challenges and how this response is linked to psychiatric disorders. His lab has made discoveries linking the action of specific stress-related genes with anxiety, depression, weight regulation and diabetes. Prof. Chen and his research team use both mouse genetic models and human patients to ultimately create the scientific groundwork for therapeutic interventions to treat stress-related emotional disorders such as anxiety, post-traumatic stress, anorexia nervosa, and depression.

His honors include a postdoctoral Rothschild Fellowship, and a postdoctoral Fulbright Fellowship (2001-2002). He received the ‘Alon Fellowship’; the most prestigious Israeli fellowship for returning scientists, granted by the Israeli Council for Higher Education, 2007-2009, and the Novartis Prize in Neuroendocrinology in 2009 and the Hans Lindner Prize in 2011, both from the Israel Endocrine Society; as well as the Sieratzki-Korczyn Prize for Advances in Neuroscience in 2010. In 2011, he was awarded the Morris L. Levinson Prize in Biology by the Scientific Council of the Weizmann Institute and the Teva Research Prize granted by the Israel Science Foundation, 2011.

The biological response to stressors is concerned with the maintenance of homeostasis in the presence of real or perceived challenges. This process requires numerous adaptive responses involving changes in the central nervous and neuroendocrine systems. When a situation is perceived as stressful, the brain activates many neuronal circuits, linking centers involved in sensory, motor, autonomic, neuroendocrine, cognitive, and emotional functions in order to adapt to the demand. However, the details of the pathways by which the brain translates stressful stimuli into the final, integrated biological response are presently incompletely understood. Nevertheless, it is clear that dysregulation of these responses to stressors can have severe psychological and physiological consequences. There is much evidence suggesting that inappropriate regulation, disproportional intensity, or chronic and/or irreversible activation of the stress response is linked to the etiology and pathophysiology of anxiety disorders and depression.

Understanding the neurobiology of stress by centering on the specific genes and brain circuits, which are associated with, or altered by, the stress response, will provide important insights into the brain mechanisms by which stress affects psychological and physiological disorders. Our research focuses on integrated multidisciplinary projects from gene to behavior using state-of-the-art mouse genetics and animal models. We are employing integrated molecular, biochemical, pharmacological, physiological and behavioral methods, converging on the generation of genetic mouse models as an in vivo tool, in order to study the central pathways and molecular mechanisms mediating the organism‘s stress response. Defining the contributions of known and novel gene products to the maintenance of stress-linked homeostasis may improve our ability to design therapeutic interventions for, and thus manage, stress-related psychiatric disorders.

The collective long-term goal of our research is to elucidate the pathways and mechanisms by which stressors are perceived, processed, and transduced into neuroendocrine and behavioral responses under healthy and pathological conditions. Our current projects include the following interlinked topics: