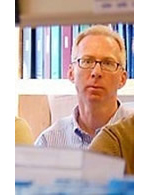 Title of the talk:
Generating and regenerating the cerebral cortex: from neuron subtype development and diversity to circuit implementation at the growth cone

Jeffrey D. Macklis is the Max and Anne Wien Professor of Life Sciences in the Department of Stem Cell and Regenerative Biology, and Center for Brain Science, Harvard University, and Professor of Neurology [Neuroscience] and of Neurosurgery at Harvard Medical School (HMS); Executive Committee member of the Harvard Stem Cell Institute; former founding Director of the MGH-HMS Center for Nervous System Repair (2001-2011); founding Program Head, Neuroscience / Nervous System Diseases, Harvard Stem Cell Institute, Harvard University (2004-2013); and (non-clinical) consultant Neurobiologist and Neurologist at Massachusetts General Hospital (MGH). He is a faculty member in the Harvard University graduate Programs in Neuroscience, Developmental and Regenerative Biology, and Biological and Biomedical Sciences; M.D.-Ph.D. Program; and of the affiliated faculty of the Harvard-Massachusetts Institute of Technology (M.I.T.) Division of Health Sciences and Technology (HST), and the M.I.T. faculty within HST.

He attended M.I.T. (S.B. Bioelectrical Engineering; S.B. Literature), Harvard Medical School (Harvard-M.I.T. HST Program), and graduate school at M.I.T. within the Harvard-M.I.T. Division of Health Sciences and Technology (HST), a graduate student with Richard L. Sidman. He was a postdoctoral fellow in developmental neuroscience with Richard Sidman at HMS, where he also trained clinically in Internal Medicine at Brigham and Women’s Hospital (BWH) and adult neurology in the Harvard-Longwood Neurological Training Program. Until moving his laboratory to MGH in 2001/2 to direct the thematic MGH-HMS Center for Nervous System Repair, he was in the basic science Division of Neuroscience at Children’s Hospital, HMS, and was Co-Director of the Parkinson’s Disease and Related Disorders Program at Brigham and Women’s Hospital / HMS. He assumed his current position at Harvard University in Cambridge in 2007, and moved physically in 2011.

Dr. Macklis is the recipient of a number of awards and honors, including a Rita Allen Foundation Scholar Award, a Director’s Innovation Award from the NIH Director’s Office, a Soderberg Prize Symposium Lectureship at the Swedish Society for Medicine, The CNS Foundation Award, Pearlstein Scholar Award, Seidman Award in CNS Research, several Hoopes Prizes for excellence in undergraduate research mentoring, and a Senator Jacob Javits Award in the Neurosciences and MERIT Award from the NINDS/NIH.