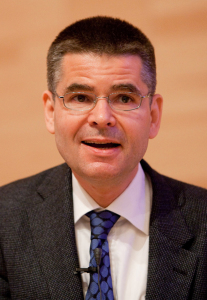 Title of the talk:
The mechanisms of hippocampal mossy fiber transmission

1991 Franz Vogt award of the University of Giessen
1992 Heisenberg fellowship of the DFG
1994 Heinz Maier Leibnitz award from the German minister for education and science
1997 Medinfar European prize in physiology from the president of Portugal
1998 Max Planck research award for international cooperation
July 1999 Call for a Chair of Physiology in Heidelberg, succession of Prof. J.C. Rüegg
July 1999 Offer of the Biocenter Basel, Chair of Physiology and Pharmacology, succession of Prof. J.G. Nicholls
1996 – 2003 Member of the editorial board of The Journal of Physiology (London)
1998 – 2001 Human Frontiers Science Program Organization grant (principal investigator), “Inhibitory synaptic signaling in interneuron networks” (with Gary Westbrook, Kunihiko Obata, and Bill Wisden)
2001 – 2006 Member of the editorial board of The Journal of Neuroscience
Since 2002 Member of the Deutsche Akademie der Naturforscher Leopoldina
2004 – 2007 Member of the grant review panel (Fachkollegium) Neuroscience of the Deutsche Forschungsgemeinschaft
2005 President of the Jacques Monod Conference “Synaptic communication in neuronal networks: From molecule to code”
2006 Gottfried Wilhelm Leibniz award of the DFG (1.55 Mio €)
2006 Szentagothai Memorial Lecture, University of California, Irvine
2006 Call for a Chair of Neurobiology, University of California, Irvine
2007 Member of the Board of Reviewing Editors of Science
2007 Tsungming Tu Award of the National Science Council of Taiwan (75000 $)
2008 – 2010 Coordinator of the Collaborative Research Center “Synaptic Mechanisms of Neuronal Network Function” (SFB 780)
2008 Member of the Academy of Sciences, Heidelberg
2008 – 2010 Internal Senior Fellow of the Freiburg Institute for Advanced Studies
2009 Adolf-Fick-Preis of the Physicomedical Society, Würzburg
2009 Offer of the Institute of Science and Technology (IST) Austria to join as a Full Professor and founding member of a Neuroscience Research Cluster (accepted)
2012 Vice-Chair of the Gordon Research Conference “Synaptic Transmission”
2011 ERC Advanced Grant (2.5 Mio €)
2014 Chair of the Gordon Research Conference “Synaptic Transmission”

The brain is the most complex organ in the human body. Rough estimates suggest that the central nervous system of higher mammals is comprised of 1011 neurons. These neurons communicate with each other by 1015 contact sites termed synapses. At present, our knowledge about synaptic function is largely based on the highly detailed analysis of a small number of “model synapses”, such as the neuromuscular junction and the calyx of Held. However, the function of cortical synapses is just beginning to emerge.
The group of Prof. Peter Jonas focuses on the hippocampus, which plays a key role in spatial information processing and episodic memory. The hippocampus is comprised of three subfields, the dentate gyrus, the CA3 (cornu ammonis 3) region, and the CA1 (cornu ammonis 1) region. Two general types of neurons are present in all regions: principal neurons, which use glutamate as transmitter and have an excitatory effect on their postsynaptic target cells, and interneurons, which release g-aminobutyric acid (GABA) and have inhibitory postsynaptic effects. Both types of cells exist in various subtypes, such as granule cells, pyramidal neurons, and various types of GABAergic interneurons. Understanding the rules of signal processing in such complex networks requires information about both connectivity (the “connectom”) and function of identified synapses.
The central goal of his research team is to determine the rules of communication at identified synapses in hippocampal microcircuits at a quantitative level. This may ultimately allow him to understand how higher brain functions are implemented in brain circuits and how these functions are perturbed in neurological and psychiatric diseases.