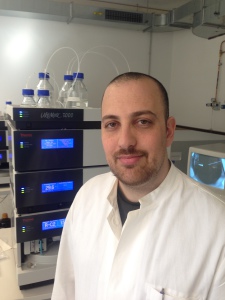 Title of the talk:
Protein acetylation during aging in Drosophila

Shahaf Peleg studied Biology at the Ben Gurion University of Beer Sheva in Israel. Later he joined the IMPRS Neuroscience in Göttingen. Under the supervision of Dr. Andre Fischer, Shahaf did his PhD investigating how histone acetylation is linked to Age Associated Memory Impairment (AAMI) in mice. After his PhD, he started his post doc in the Andreas Ladurner and Axel Imhof labs at LMU (Munich) where he is using mass spectrometry to characterise metabolic and chromatin remodelling changes during Drosophila aging.

Aging is a fascinating and complicated process that involves many factors. As we age and approach midlife, various changes in our transcriptome occur. One mechanism which oversees and modulate the transcription of our genes is chromatin remodelling such as histone acetylation. The acetylation process itself is connected with the activity of metabolism, a process that also changes during aging. Shahaf Peleg is interested in the connection between metabolic activity and histone acetylation alterations during midlife of Drosophila. By combining fly genetics, metabolic essays and novel mass spectrometry approach, our work has provided novel insights on the changes in the metabolism – histone acetlyation axis during the onset of aging.