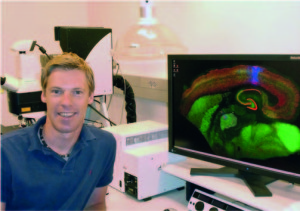 Title of the talk:
Towards a brain-wide model of perceptual decision-making in the rodent whisker system.

How the brain is able to transform sensory input into decisions remains unknown. Understanding the neuronal basis of decision making is hence one of the major challenges of systems neuroscience. Commonly, recording/imaging during sensory-motor tasks seeks to identify neural substrates of computational elements defined by statistical decision theories. This approach determined correlates of tactile-based sensation and action in sensory and motor cortex, respectively. Now, the crucial questions are 1) how these correlates are implemented within the underlying neural networks and 2) how their output triggers decisions. The Oberlaender lab uses the rodent whisker system to address these questions. Specifically they aim to elucidate how the interplay between biophysical, cellular and network mechanisms can encode a percept that gives rise to a decision. Rodents cross a gap when detecting its far side with a single facial whisker. This suggests that touch during exploratory movement of a whisker triggers the decision. A potential mechanism underlying the percept of active touch is that layer 5 thick-tufted (L5tt) neurons in somatosensory cortex receive touch and movement information via specific pathways that target basal and apical tuft dendrites, respectively. When localizing the far side of the gap, the two inputs coincide and result in burst spiking output to (sub)cortical areas, triggering the gap cross. To test this hypothesis, the Oberlaender lab is reconstructing all sensory/motor-related local and long-range pathways involved in whisker information processing, measures whisker-evoked responses of these populations and uses the data to constrain network simulations of active whisker touch. To do so, they have developed a multidisciplinary strategy by combining in vivo electrophysiology, with virus injections, custom-designed imaging/reconstruction tools and Monte Carlo simulations. This reverse engineering approach will provide unmatched understanding of mechanisms that underlie perceptual decisions and will function as a roadmap to derive general principles across sensory modalities and species.