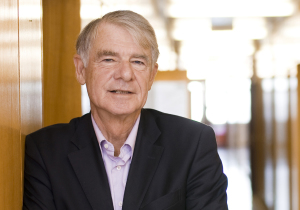 Title of the talk:
Neuronal dynamics in the cerebral cortex

He is Director emeritus at the Max Planck Institute for Brain Research in Frankfurt and Founding Director both of the Frankfurt Institute for Advanced Studies (FIAS) and of the Ernst Strüngmann Institute (ESI) for Neuroscience in Cooperation with Max Planck Society. His research is focused on the neuronal substrate of higher cognitive functions, and especially on the question how the distributed sub-processes in the brain are coordinated and bound together in order to give rise to coherent perception and action.

Research focuses on the analysis of neuronal processes in the mammalian cerebral cortex that underlie higher cognitive functions and their deterioration in disease.

Of particular interest to us is the question how information provided by sensory stimuli or prior experience is encoded. We believe that the evolution of neocortex introduced novel strategies of information processing that go beyond the capacity of neural systems utilizing essential amplitude (discharge rate) modulations and labeled lines as coding space. Currently we pursue the hypothesis that further relevant information is contained in the precise temporal relations between the discharges of distributed neurons and in case of oscillatory activity in the phase relations between oscillating cell populations. Examining temporal relations among the activity of distributed neurons requires simultaneous recordings from multiple neurons. The strategy common to all projects is, therefore, to obtain massive parallel recordings from multiple cortical sites, to study the resulting high dimensional response patterns with advanced methods of time series analysis and to establish relations with specific stimulation conditions and/or cognitive and executive functions. In most of the projects we use the visual system as a model. To study neural dynamics with cellular resolution we record from anaesthetized cats and awake macaque monkeys trained to perform cognitive tasks involving perceptual decisions, short term memory and prediction. The electrophysiological measurements in nonhuman primates are complemented by functional magnetic resonance imaging (fMRI) and diffusion tensor imaging (DTI) for the identification of functional networks at a more global scale.