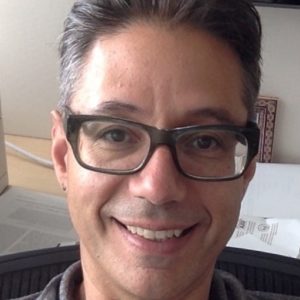 Dr. Carlos Brody is an Investigator at the Howard Hughes Medical Institute, and is the Wilbur H. Gantz III ’59 Professor in Neuroscience at Princeton University. His lab has been pushing the envelope on the complexity of cognitive tasks that rodents can perform, and has been using these tasks, together with computational and experimental approaches, to study the neural mechanisms underlying cognition.

His talk, ‘Collicular circuits for executive control’ will be about:

”How do we control routing of information within our brains? We have studied this by adapting a well-studied primate task to rodents: on each trial, subjects are told whether a “Pro” or an “Anti” rule will be in effect for that trial; after a brief delay, a visual cue is presented either to the left or to the right of the subject; then, on “Pro” trials the subject must orient towards the cue, while on “Anti” trials the subject must orient away from the cue. I will describe studies of this task focused on the superior colliculus (SC), a mid-brain region known to be involved in controlling orienting movements. We found that, during the delay period, deep layer neurons of the SC encode the task rule, and after the cue is presented, they encode the side of the animal’s upcoming orienting choice. They encoded the choice remarkably quickly, about 200 ms faster than cortical regions thought to be involved in similar processes such as the frontal orienting fields (FOF) or medial prefrontal cortex (mPFC). This suggests that the SC might lead the process of choice formation. However, optogenetic inactivation of the SC during the choice formation period had no effect on choices, even while immediately previous delay period inactivation selectively impaired choices on Anti trials. We used computational models to ask whether dynamics in a network of SC neurons could account for all these data together. By repeatedly fitting model parameters, starting from many different initial conditions, we found a diverse set of models that were consistent with the data. Within this diverse set of models, some consistent themes emerged, while other a priori expected patterns (such as mutual inhibition between units encoding opposite decision outcomes) were found to be unimportant. These electrophysiological, optogenetic, and computational modeling data strongly constrain the collicular circuit motifs that underlie the SC’s contribution to executive control.”